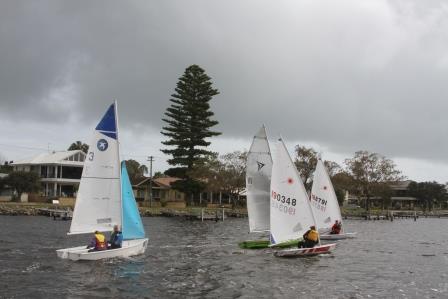 But no, there was a window of opportunity. Seabreeze said mmmm marginal for our brief racing period, however Willy Weather was painting a different picture. Yes folks, they were saying that racing was do-able!

So, we watched, we assessed, we monitored, and what would you believe?

Yes, the weather forecast from Willy Weather was spot on! And as a bonus….it actually wasn’t that cold! (for winter)

Lucky for the unusual fantastic wind conditions. Didn’t have to worry about the tides as the wind was enough and no sandbank issues as it was a ginormous high tide….yay!!!

Dave decided to watch from the shore….were you jealous Dave? Mike never showed much to the Pauls’ delight….who both chose to sail a radial…..ahhhh, I think they missed you Mike!

Peter in his green machine won the race…. closely followed by Paul Luff….yeah….Paul did well. And hot on his heels was Paul Rowley…but hark! Did you hear the race officer, aka Ross, emphasize not to cross the finish line unless finishing?  Mmmm I did and I was further away….mmmm.  But then I can’t talk. There is a reason I sail sharpies. They are comfortable! Not like the Pacer where dickie knees can be a problem. So, after coming down hard on my knee and causing an accidental 360, my wonderful crew, Andrew took over and allowed me sit more comfortably up the pointy end

I can’t emphasize how much our wonderful volunteers mean to us. Ross and Laura who run the race. Kim and Ron who will do anything ably. Ken who is the Big Red guru. Jules and Pat who were willing to travel 100km to join us, however erred on the side of caution and chose not to come this time after making sure we would be ok. And the wonderful Milton who assisted Ross and Laura (in the shelter of the start boat, yes, it did rain!)