This August, I represented Australia in my first international regatta at the Laser 4.7 Youth World Championships. They were held at in Kiel, Germany from the 2nd August to the 8th August. I arrived in Kiel on the 24th July in preparation for the regatta to do some pre regatta training with the rest of the Aussie Team, coached by Luke Elliot (Swifto). During our training week we sailed in light to medium winds and focused on various topics for each day. On some days we trained with other teams such as the British, Irish and Norwegians, providing us with congested startlines, mark roundings and tactical situations we would have to face during the actual regatta. On Monday 1st August we had our final training session in the morning with Luke Elliot and Tristan Brown, who just arrived back from coaching the radial worlds in Ireland. The opening ceremony was great fun! The parade was lead by a drumming band and it was a great feeling walking along with all the different nations and our kangaroos were still very popular getting thrown around the crowd.

We launched at 9:30 for and 11am start. After an hour of sailing to the course in a nice light breeze, we got prepared for the start. The wind soon died out and after waiting a couple of hours on the water we were sent to shore. After waiting on land for a couple more hours, racing was cancelled for the day, due to the inconsistent breeze. Good breeze was due for the rest of the week so I was really excited to actually start my first race!

Today was a completely different day from Tuesday. We had medium winds and rain and a temperature drop. We finished all 3 scheduled races where I placed 38, 5 and 14. I was really excited for the first race feeling quite calm and collected until my 5 minute warning signal went. Then I wasn’t so calm, I was so nervous. I didn’t know what to expect and just wanted to start well and get to the finish line. I placed 38 in the first race, I was so happy it was over and I got rid of all my nerves in that race. I was pretty pumped for the next race and performed quite well in it. I didn’t have the best start so I tacked early and headed out to the right side of the course to reach a pressure band. It ended up paying off and I was 3rd to the top mark! After a good downwind and second upwind I moved into 2nd and it started getting quite stressful being up the front end. I made a couple of mistakes on the final downwind and reach which lost me some places and ended up 5th. I was quite shocked that I got a top 5 finish in my second race at my first worlds but it gave me confidence that I could get good results and be up in the top 10. The final race of day I raced a consistent race and made good decisions and I placed 14th so overall I was really stoked about my results on my first day. Wind was due for the rest of the week and another 3 races were scheduled for the next day.

Once again Kiel delivered a great breeze and some choppy waves. There were three scheduled races but we only completed two where I placed 28 and 16. First race was a tough race for me. I was in a good position and heading downwind in the top 15 but lost control in a big gust and capsized. I got back up and worked my way back into a good position again and it came down to the final reach and capsized again. It was an absolutely shocking race and I was so relieved when it was over but took the positives out of it knowing if I had stayed in control and been more prepared for the gusts that knocked me over, it could’ve been a top 10 finish race. The second race I stayed in control and raced well to place 16th which I was happy with. It was a long day with lots of general recalls so it was nice not to have the third scheduled race.

It was the final day of qualifying today and I was sitting in the mid 20s which I was pretty stoked about. I wasn’t really worried about finals or which fleet I was going to qualify for, I just wanted to race some good races, get solid starts and race the best I could. One of my goals prior to the start of the regatta was to qualify for the gold fleet but I didn’t know how I was going to perform. This day turned into an extremely stressful day. After a general recall on a black flag start, I was BFD and I sat out for that race. I was pretty annoyed I was BFD but kept my head high and was keen to start the next race. I knew I couldn’t be scared of the line in the next race so I wasn’t but got rolled soon after the start. I didn’t have an amazing race and finished in the 20s. Not long after the final race Tristan informed me that the first race (that I was black flagged and sat out of) was actually abandoned at the outer loop gate. I immediately retired from the race I had just completed (which was actually the first race). Knowing that I could’ve been DNE from that race was really hard to swallow and I had to use my anger to my ability in the next race and try have a good one. I executed a good start and got out into clear air on the favoured side and was 5th around the top mark. I had a good downwind and held my position. The second upwind I went right and gained two places and managed to hold third place until the end. This race was definitely the highlight of my regatta. I must sail better when I’m angry!

Even with my DNE I qualified for gold fleet but I sought redress against the race committee for not notifying everyone correctly that the race had been abandoned. After having my first ever redress I won and was scored a BFD. I never knew I could be so excited to get a BFD! We waited on shore for a couple of hours because there was a lightening storm on its way. Once the storm past we hit the water in the strongest winds we had had all week, 20 knots. I struggled to find a space on the line in the first race causing me to duck the fleet. I did manage to gain some places but had a shocking first race of the finals, placing a 46. The second race I managed to have a good space at the start but too far away from the favoured side and got rolled off the line. I didn’t manage to catch many places and had another bad race and placed 48. So it was quite a hectic day with lots of different emotions.

I couldn’t believe it was nearly all over. The final two races of my first worlds, I was quite sad it was coming to an end!! I was really excited to get on the water and enjoy the last two races competing against the best in the world. I wanted to soak up as much experience and learning as I could since it would be another year until I’d get to compete at such a high level. The first race was a dramatic race. I came into the top mark in the 30s and a pack of boats came in on port and caused a massive pile up which left me second last. I fought back as much as I could and finished 53rd. I was so determined to get a decent result in the last race and I pulled off a 35th which I was happy about. I finished my first world championships 43rd, which I was very pleased about and I performed better than I thought.

Overall, this regatta was such an amazing experience. I learned so much and took away some invaluable knowledge to help me improve not just my sailing, but my psychology and boat maintenance. I’ve made many friends not just from Australia but from other nations who I will compete against for years to come. I’ve gained confidence and I’m more motivated than ever. Thank you to Mandurah Offshore Fishing and Sailing Club, Ron Tough Foundation, Mandurah City Council, Coles, WALA and Local Sporting Champions for the financial support to help get me there and thank you to Peel Regional Academy of Sports, Fremantle Sailing Club and South of Perth Yacht Club for the training support.

Photos from the Trip 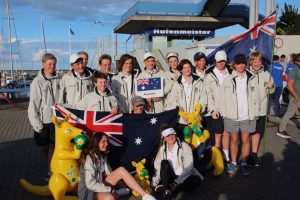 Team Australia at the Opening Ceremony 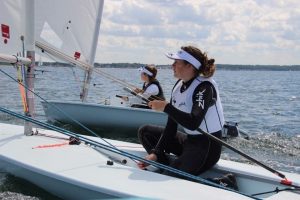 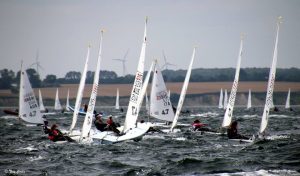 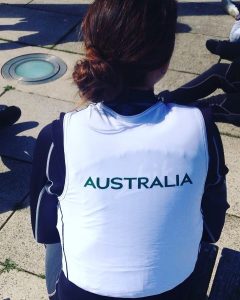 Me in my On-Water Team Gear 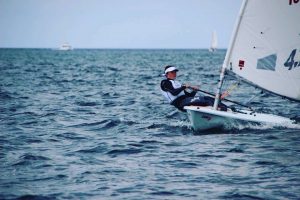 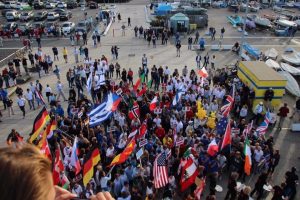