The best news overall was that MOFSC once again defeated FSC in the Sailing Team event – so well done to Scavenger, Dynamic and Nyari and their skippers and crews!

Our club also put on a great Saturday night in the galley and then cooked over 100 brekkies on Sunday morning. The feedback from the FSC sailors and Race Officers has been fantastic – particularly the fireworks! Most miraculous in my opinion is how we managed to squeeze an extra 30 boats into our marina. A great big tick and thank you to all those involved. 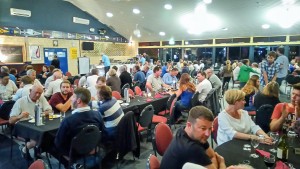 The Division B results for Saturday 19th March are:

No event was held for the Division A fleet in order to accommodate the FSC ocean race for that weekend.

Keelboat results can be checked (at almost) any time at http://www.sportspage.com.au/yacht_clubs/mofsc/mofsc.htm