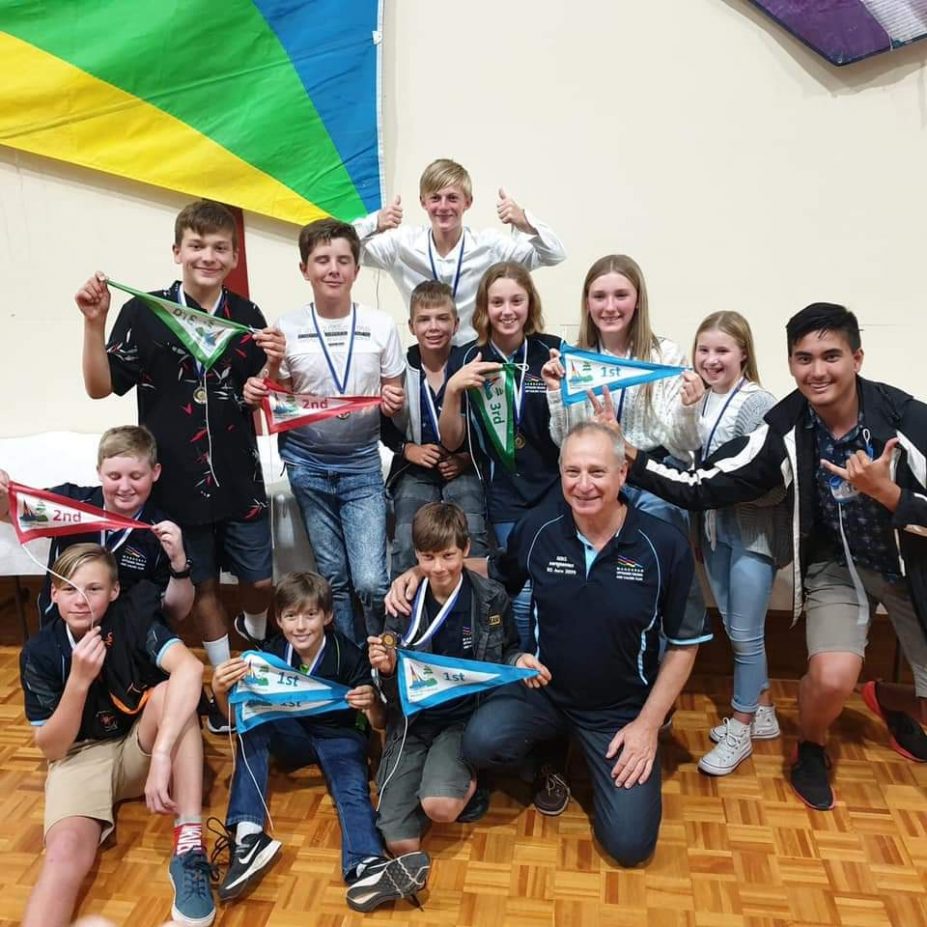 The MOFSC Dinghy Group headed off down South to Walpole, to once again participate in the annual “In The Trees Regatta”.  This is the third year in a row that the Dinghy group has attended this wonderful event, and this year was no less enjoyable than others.  I must mention that we had ‘Real Thing’ (Nolex 25) make the journey down to compete.  Well done Charles.

Th kick things off, I would like to say a huge thanks to every single person that put in a huge effort to make this trip a wonderful success.  That is all the Volunteers (And their Volunteer support Crews ‘Partners’), Mum’s & Dad’s, the Junior Sailors, and the more Senior Sailors.  Without you all, we wouldn’t be able to compete at such a wonderful event.  At the beginning of this season Jamie and Bec’ Wright put their hand up to coordinate this years foray down to Walpole, and the results say enough about the efforts that “Team Wright” have put into corralling a bunch of Dinghy sailors like us!  Putting it into perspective, we had 21 boats and 29 competitors from MOFSC compete in the regatta, and this does not include all the Volunteers and Support.  The term “Hearding Cats” comes to mind.  MOFSC did rate a special mention at the presentation dinner, as we were the attending club with the most boats and people who were competing. A special mention for our coach at Walpole (Bee).  Nothing less that adoration in the eyes of the juniors..  Thank you Bee.

We must never underestimate the benefits of weekends like this in binding our ‘Sailing Family’ and making our club the go to place for fun, excitement, learning and developing friendships.

After leaving MOFSC on the Friday morning, the trip down was uneventful, with a stop at the Forrest Hwy servo’s, then a coffee break and a pie in Donnybrook at the Bakery.  There we caught up with Paul, Bill & Ally (Kevin & Paul were already well on their way to Walpole).  Next stop was Manjimup for a quick break, then on for the last push through to Walpole to arrive around 1500.  We unloaded the three Fevas at the ramp and checked into our Digs.  Brenton arrived soon after, so Brent, Elise and I took Robertina to the town boat ramp and unloaded.  In the meantime, Mum’s, Dad’s and Kids were starting to rig the Fevas, Bic’s and Oppie.  Friday night was a casual affair with most people grouping up in the Coalmine Beach Caravan Park and having a few sherbets, and quite a bit of Red Wine.  The juniors had a great time touring the bush with their flashlights, spotting anything that moved (Roos, Rabbits, Kookaburra’s and a Tawny Frogmouth)…

Saturday was the first race day with 2 races scheduled.  Walpole put on a very well organised regatta, with a brekky and lunch tent that serve up a variety of warm food.  We finished rigging boats and attended the Competitor briefing at 1200, where race control had decided to change Saturday to a three race (Back to Back) day.  This was decided, as at the time the forecast for Sunday was less than favourable for competition, and as it turned out, was a very wise move!  The conditions in the Nornalup Estuary were to say the least, variable, with at times quite light, with other times of significant gusts, which made it a very tactical day.  Racing is conducted across 11 divisions, One start boat, two courses, and one finish boat.  Considering that there are eleven starts it can be quite a while before your division starts, so there is plenty of time to reach back and forth behind the start line, in great reaching conditions.  I did note that this year, there was a cluster of Lasers, etc that parked up under a backdrop of huge Tingle Wood, waiting for their start sequence.  If an enterprising person had a big thermos of coffee (or something stronger) they would have made a killing!  The courses were much shorter that we are used to, but great sailing nonetheless.  Our Junior fleet did a great job and handled the sometimes heavy conditions well.  By the end of racing and sailing back to Coalmine Beach, it was quite a late day off the water for de-rigging and a nice hot shower.  We were expecting a sausage sizzle at the WYC, but unfortunately this did not occur, so our groups pooled their BBQ’s and cooked up a great meal.  I did observe that less cordial and Red Wine was consumed on Saturday night?  Maybe some went a little hard on the previous night!  As expected the wind picked up during the night with very strong lee shore winds, which required a 0300 check on Robertina, which was at anchor (All good there due to Ken, pre-empting the wind and letting out more scope on the anchor line).

Up early on Sunday, to continued strong winds.  We had a morning competitors briefing where it was decided to fly the AP whilst Race Control went out onto the estuary to decide whether it was sailable.  Unfortunately, the strong winds (25 – 30kts) did not abate, so it was decided to abandon the last two races on Sunday.  It was a good call, as the wind kept up until later in the day, when it was still fresh but too late to sail.  This gave all competitors time to do the sight seeing tours that are within a short drive of Walpole, such as the Tree Top Walk, Circular Pool, etc.  It also gave us heaps of time to de-rig, pack boats, and retrieve Robertina onto her trailer, ready for the trip home.

Sunday night was presentation night, with MOFSC taking up two and a half full tables.  Overall, the Juniors and Senior sailors from MOFSC had a great haul of pennants, although it was mystifying at times to work out the handicapping!  An excellent effort from All of our Junior and Senior sailors..

Congratulations to WPYC, for running another wonderful event. For those that have not been down for the regatta, it really is a must attend event.  If you want to head down next year, make sure that you book accommodation early, to avoid disappointment.