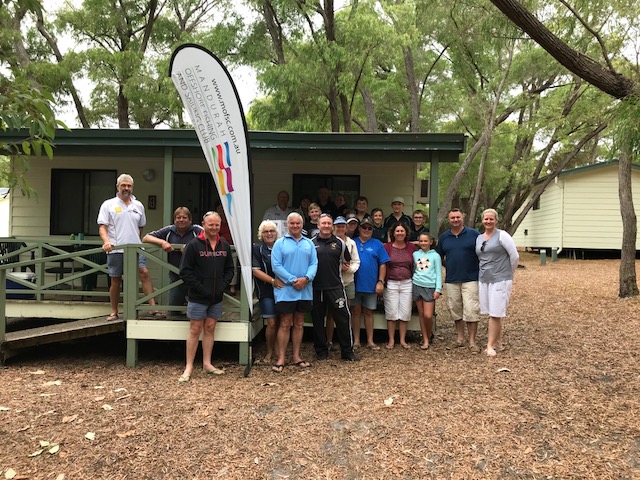 There were 14 intrepid sailors from our club who went to the Walpole In the Trees Regatta on the Labour Day weekend.  A massive thank you must go out to all the volunteers who helped get the boats ready for transport and Warren Blay from Scavenger Supplies for the use of his truck to transport the 3 Feva’s, 1 Bic and a Laser down to Walpole and back …

We all arrived Friday and the task was to set the boats up and claim an area on Coal Mine Beach, alongside the regatta course. Again the Mandurah team ethic came out with parents and sailors helping to lift the boats from the truck to the ground, taking them to our selected area on the beach and putting the masts up ready for the racing on Saturday.

Well it was up early for most of us, spinnakers packed on the boats and making sure we had all the gear ready!

Parents, juniors plus a few slightly older competitors waited for registrations to open, sign in and receive their bag of goodies and bow numbers.

Then to stick on the bow numbers, which proved to be a skill very much in need by one particular Laser sailor? Then to read the Sailing Instructions and sort out the courses.. Thanks Mike Gaebler for supplying laminated copies of the courses for all juniors and one for himself mmmmm…

After this with Jibs on the boats we waited for Bee to turn up from her early morning drive from Mandurah. There was some very excited and nervous junior sailors doing their first regatta and first time racing against other competitors.

The juniors were the second fleet of 10 starts so not only did they have to watch the start boat for signals, there were foiling Moths, Cruisers, Mirrors, Tasars, Sharpies, 3 Windrush fleets, Sabres and Lasers all buzzing around and to their credit not one mishap with another boat, but there were a few capsizes.

The older sailors sailing mainly the laser full rig  were 8th off and Ally and her crew of Katie and another junior Chris Ward were off at fleet 7. We never saw much of them because our start was after them and there was a lot of comradery and fun amongst this old group and the guys were busy hazing each other!

Over the line first of the Mandurah boats were Cha Cha Maru, Kevin Luff who was 2nd over the line followed by Mike , Paul Rowley and Paul Luff all in the top 10 out of 16 Lasers ..

Second race saw the juniors struggling but enjoying themselves out on the water. Dome Bic 1 Jacob had a few swims so did Van and Tilly in a Feva and came back to shore exhausted but still smiling.  Kevin led the Laser fleet and was taken out on a port and starboard which broke his main traveller. Kevin was in the right so retired not happy!  However, after arriving to shore and seeing the smiling faces of the juniors and parents made up for his disappointment.  Paul Rowley, Mike Gaebler then Paul Luff all in top ten again. There was a rumour Bee hopped into a Feva due to an injury to Tilly and sailed the race.  Must remember to thank Ken and Trish Fullwood for coming down and Ken, Graham and George Casey on the Big Red support boat. Now we had a miniature boat, aptly nicknamed Little Red with Warren Blay and Neil Dixon balanced inside… just not sure how they fitted in but thanks guys for being support for the young sailors. Also Di Flintoff on the finish boat and Sue Olsen doing results.. Well that was day 1 sailing. Plenty happening and a few tired sailors. We had a great get together for a BBQ then a sing song at the Flintoffs caravan. Then bed time because we had to sail the next day

Sunday three races well it was up early to get more bow numbers as some came off again the young sailors put them on under the eye of the parents. The fevas got off to a great start all three crossing the line and Jacob in the Bic got there.  They are the winners because they participated!

In this race Ashton Blay and Alex Dixon sailed really well even putting the kite up and went prawning! We all know what that is like lol.. Niamh  and Jack sailed really well but guys, we need to be prepared for the cold. It was freezing! Full wet suit for me that day.  Lasers again, Kevin finished third and Mike Gaebler and Paul Rowley closely behind. Paul ‘Hand brake’ Luff who was in front of me for a couple hundred meters until he tacked and sat there for 30 seconds. Thanks little bro..  Ally was seen blasting around with the Sharpie and picked up a second in that race.. Any rumours about me going for the wrong buoys may be right in the 3rd race? I went to the wrong mark then having to change course to the correct buoy. I must say I was not the only one..

The Fevas tried hard but 2 only finished due to breeze increasing to over 15 knots and Jacob in Dome capsizing many times came in. Lasers again… Kevin was second over the line with Paul Rowley, Mike and Paul close behind ..

It was in for lunch and find out how everyone went. The smiles on the faces of the juniors were great and their attitude was very positive… Well lunch was nice… hardly any wind where we were so we expected a nice afternoon sail. Well as soon as we got to the beach we nearly got blown over! 20 to 25 plus knots. After discussing with the Juniors and coach it was decided not to sail. Wise move! They should be very proud of their achievements, never raced before and doing a regatta in unfamiliar water.. well three older sailors decided they were toooo exhausted to sail ..  The Parents and the junior sailors de-rigged the boats and put them in the truck making our lives so much easier thanks guys you know who you are.

Well Kevin and Mike chose to sail full rig   p.s too lazy to go to radial sail which is smaller. Off we went I had another great start but Mike was in front by the time we made the top mark. I was in second and Mike fourth,  down to the wing mark. Bugger, it was survival mode we are only here once gybed oops capsize not once but three times grr Mike goes sailing past laughing I get up and at the bottom mark I see Mike capsized….. a little smile

But in breeze like this it is white knuckle time hang on and hope , rounded the buoy and I get to third at top mark but again wing mark ,  help , discretion is better park of valour I do a granny for those of you who do not know what a granny is, it’s a tack when you are supposed to gybe, I crossed the finish line third

Am exhausted and Mike in fifth  now the fun part begins getting to shore safely, we made it safely to the shore and there was Paul and Paul both there with a cold refreshments after a lot of happy banter we packed away our Club Flag got the boats on the trailers and headed for a hot shower.

Presentations were after a great meal catered by volunteers,  there was 260 people in the hall. Had a great time .. After the presentation Mandurah Offshore Fishing And Sailing club came away with seven people getting flags and all the juniors received a gold medal which is a great gesture from the Walpole club..

To the Juniors who came away I wish to congratulate you for having a go these are Niamh and Tilly, Jacob, Jack,  Van, Ashton, Alex you have done your parents and this club very proud .. Of course our other junior Chris Ward did well on the sharpie as a trapeze person ,

I wish to thank again our sponsors for the weekend Scavenger Supplies for the truck  Thanks Warren, our support boat crew George, Ken and Graham thanks guys never saw you when I needed a drink on water lol, Di and Sue who are always willing to help out, Tuesday I must thank Guy and Paul for helping me put the yachts back together and clean them, I might add cleaning them was done here because no fresh water at coal mine beach to do this.

Late News a big thank you to Charles Knight for donating a sixth Feva to the club This was rigged up today as well, we need a few more juniors to take up the challenge and sail with the other Feva’s  and Have FUN!  Until next time…

As well as the photos below there are lots more on this page just follow the link! 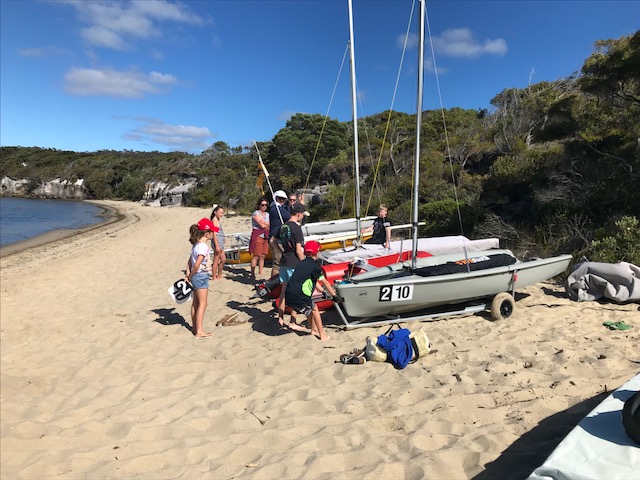 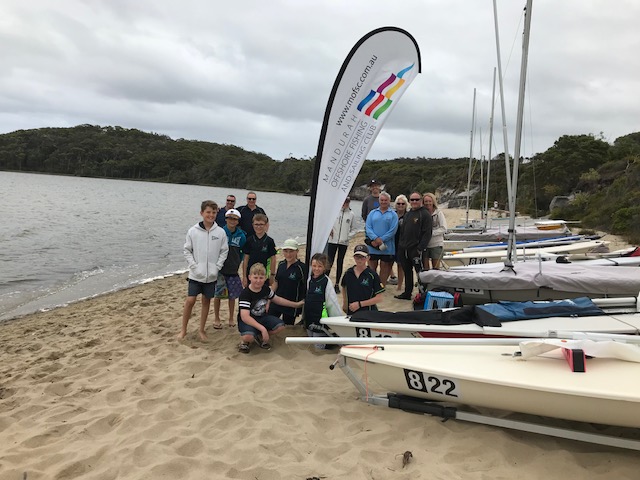 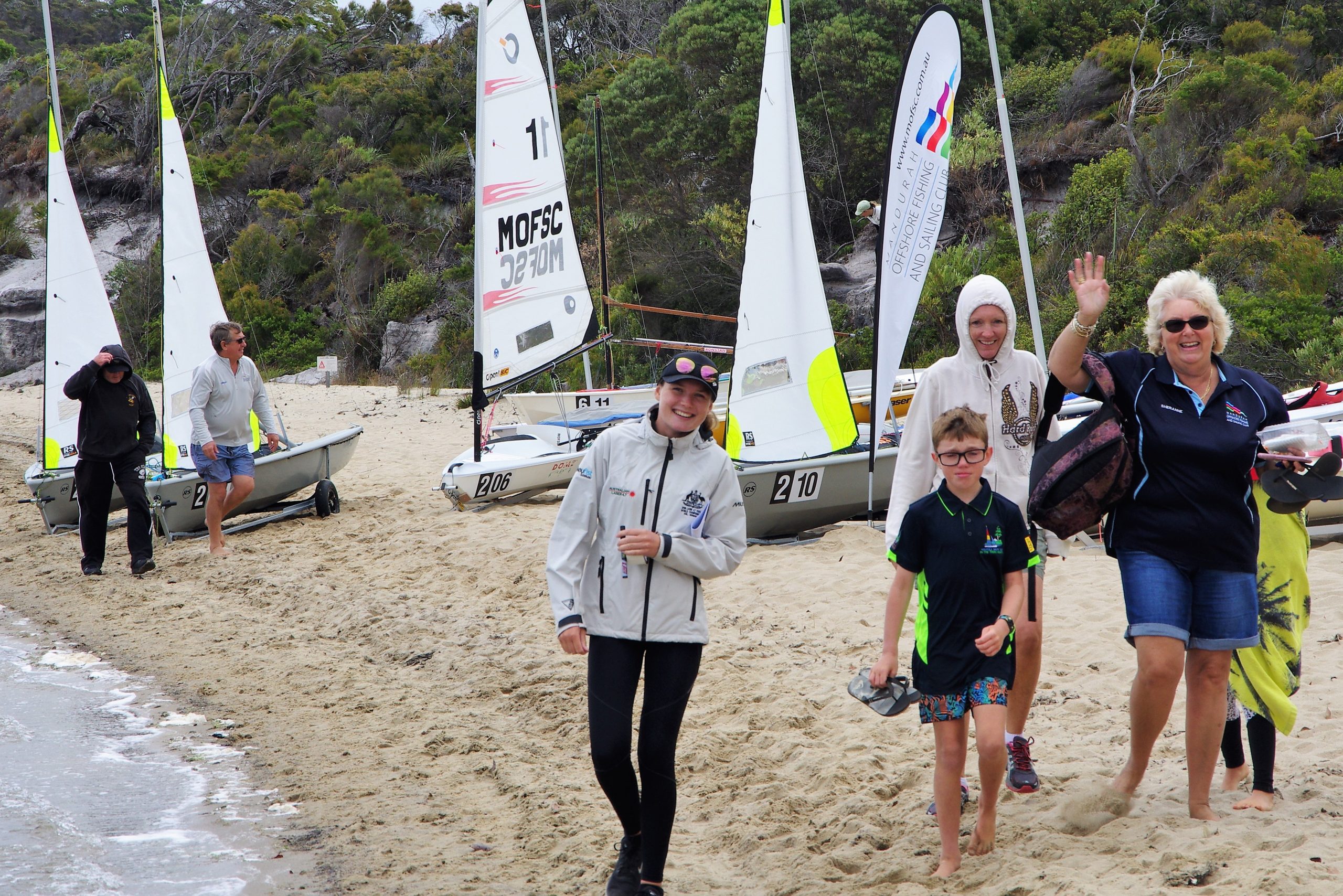 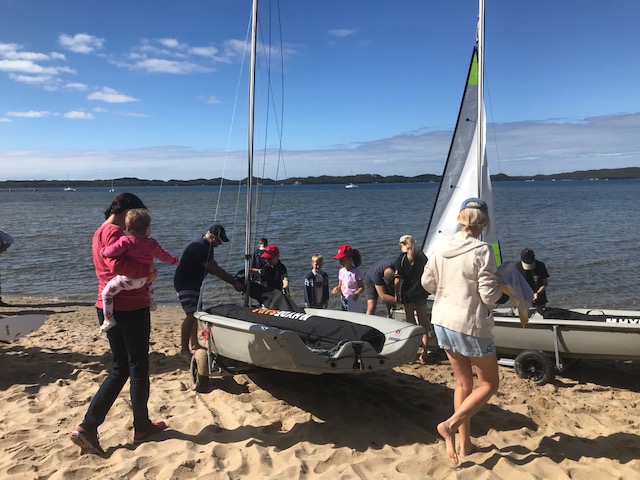 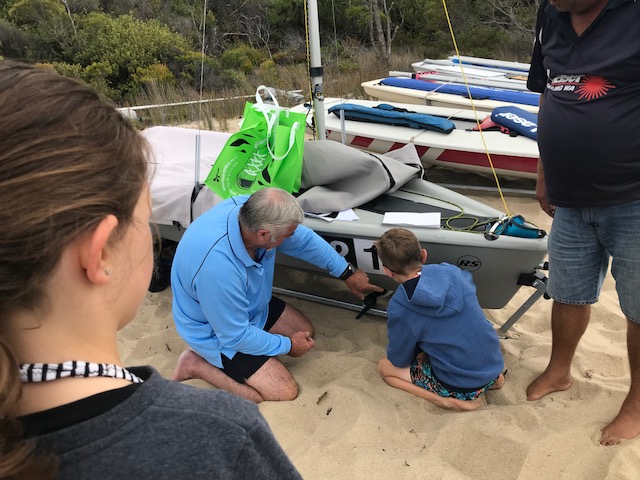 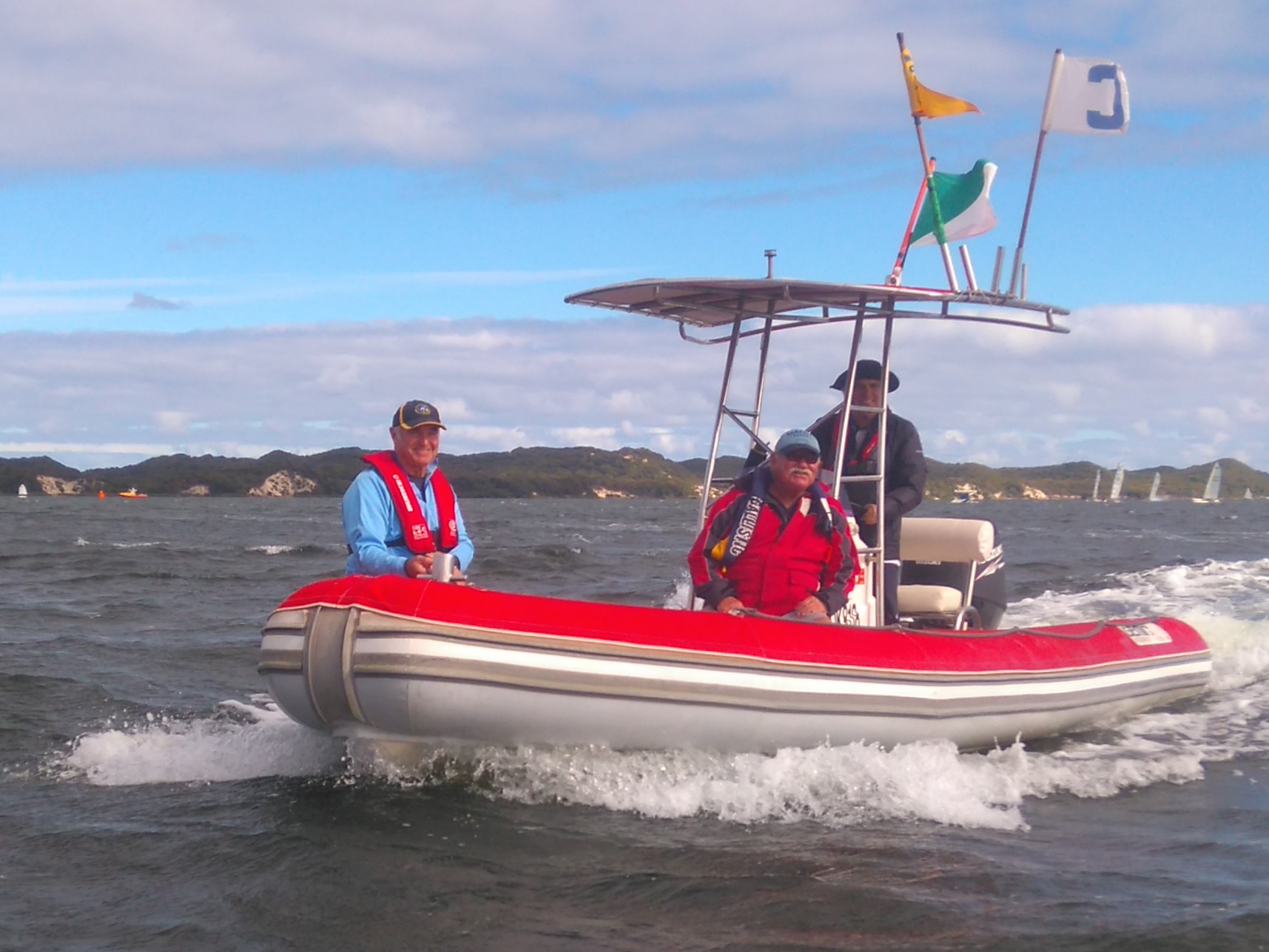 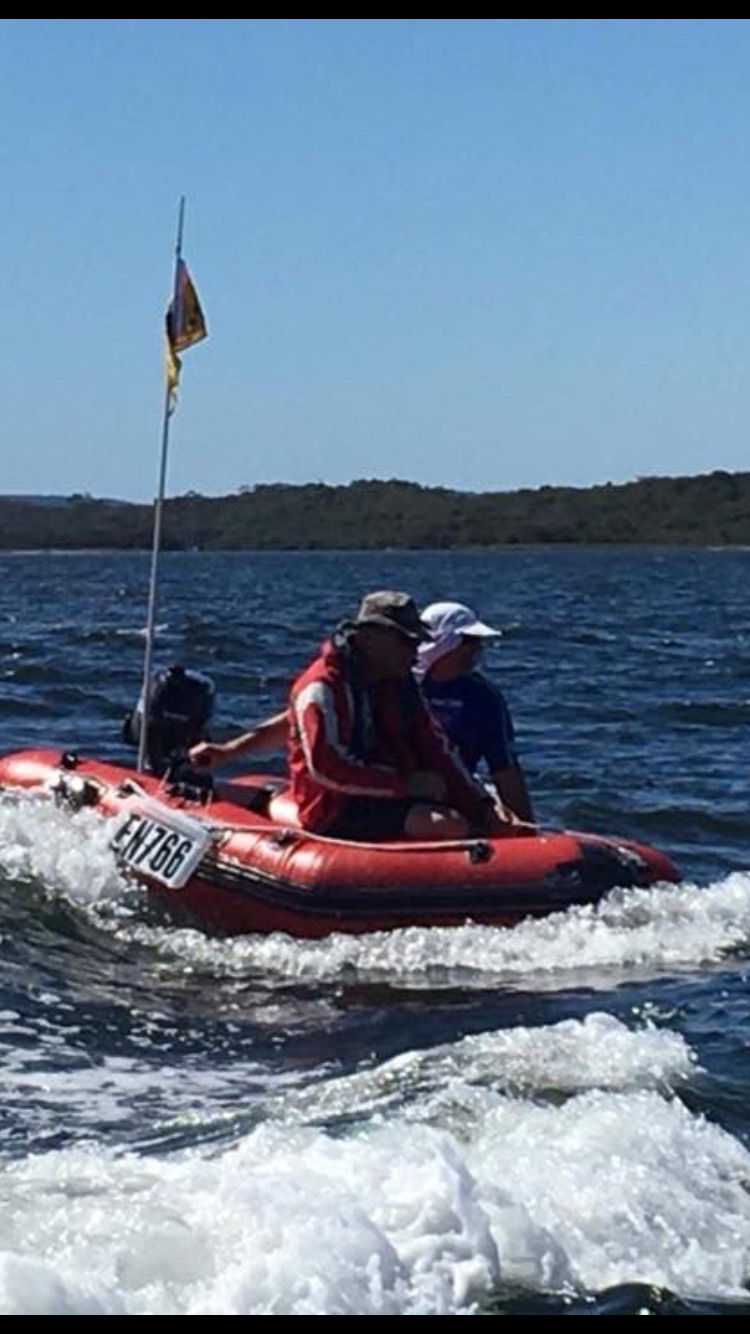 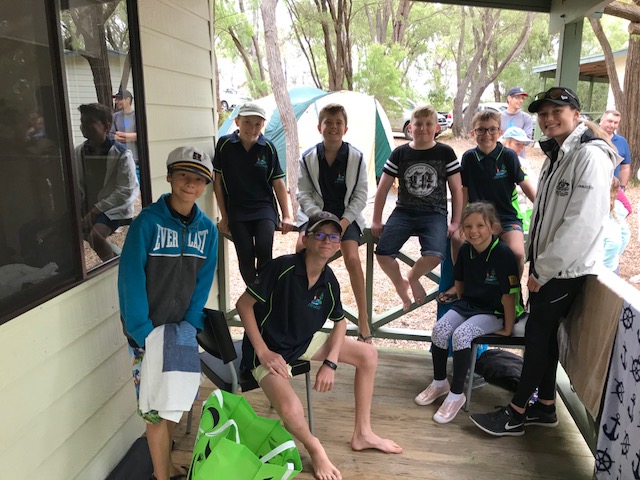 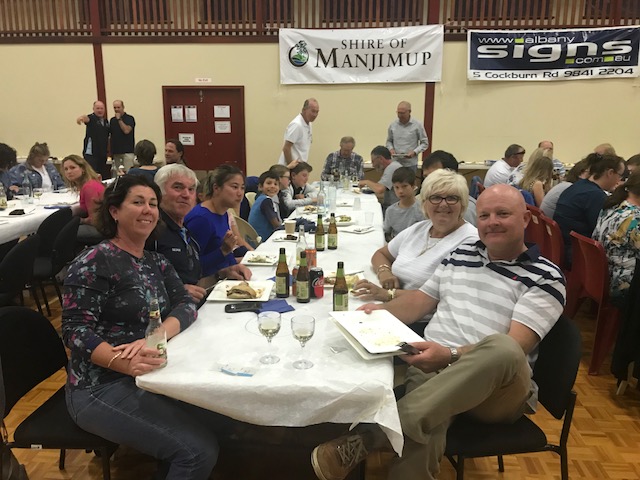 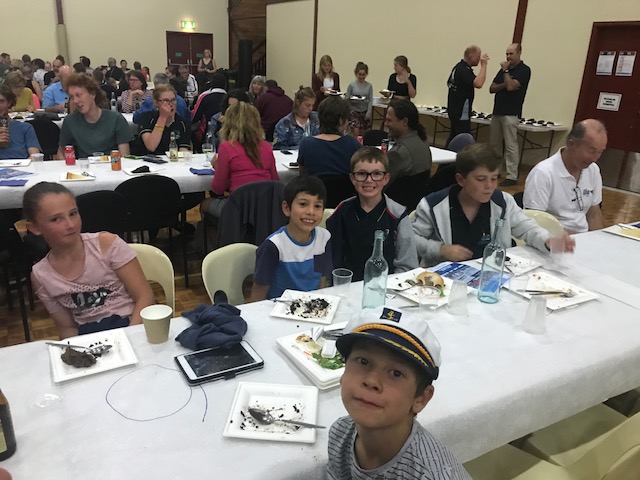 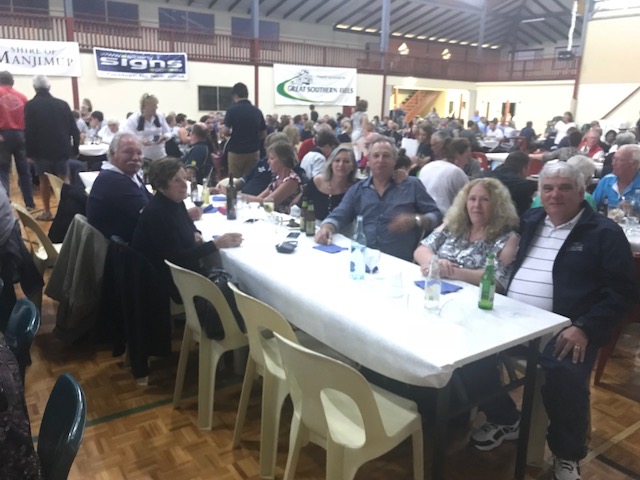 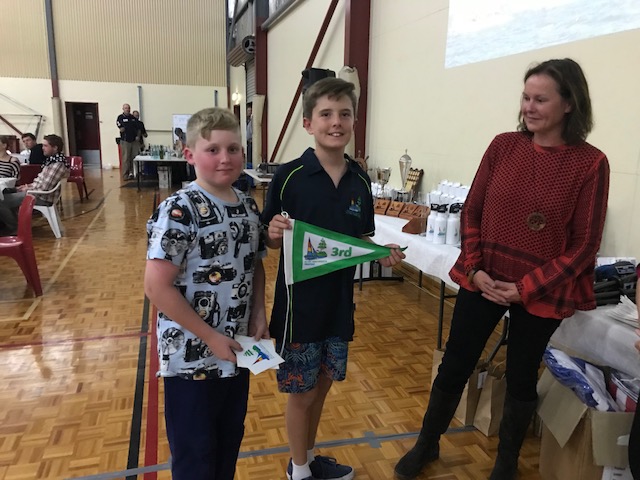 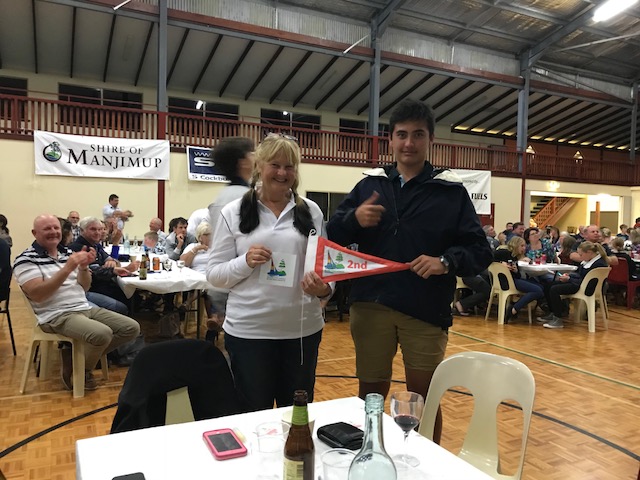 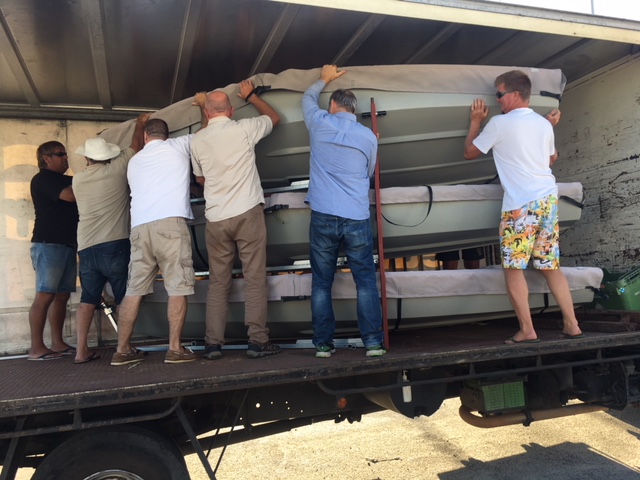 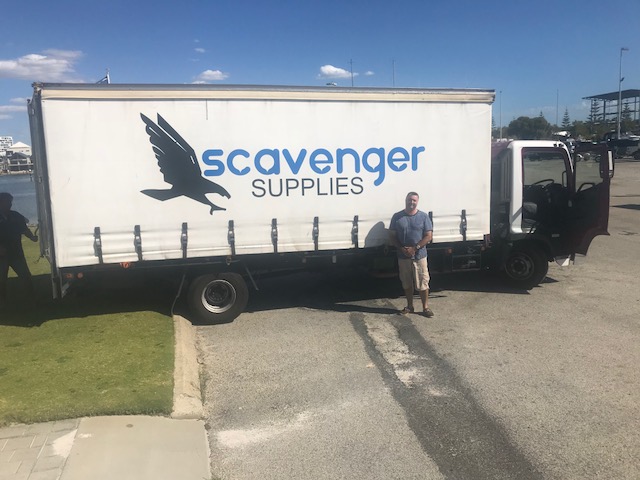 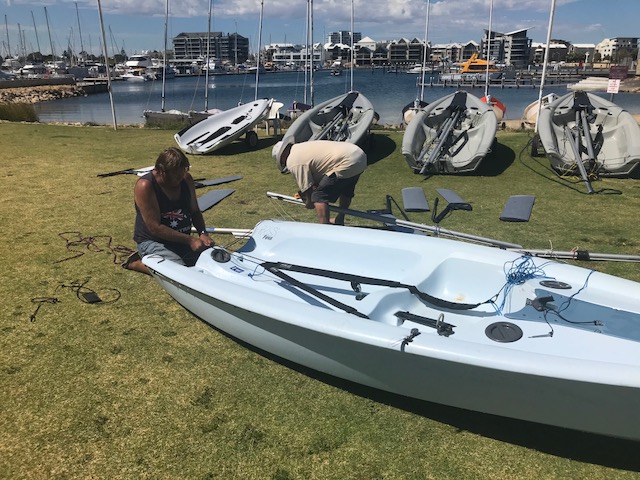